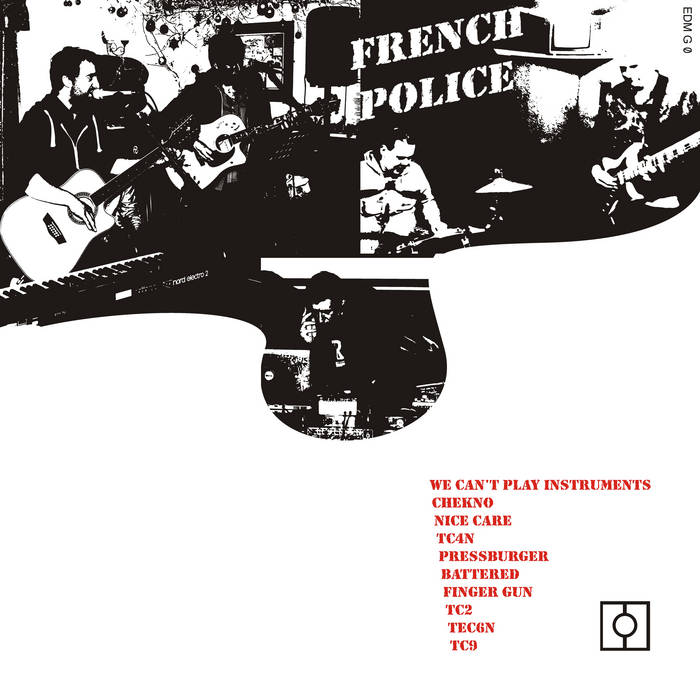 Ian Alexander Inspired by Hendrix playing the guitar with his teeth, Steve had an awesome party trick whereby he could do a single open-E pop/slap with his cock on the bass. It was later recorded into a 3-second track, however the name escapes me. something like 'the fourth letter of love' which is sad not to see on this release. A group of weirdo freaks but my God they did some awesome music!

According to mutual acquaintances, French Police are a bunch of wankers that all hate eachother but squatted together in the 70's in the luton and dunstable area. they even had a makeshift studio in one of Vauxhall's disused factory buildings. Pete & Dave Shredder are the lead guitarists, John Peters on Vocals, Steve Philips on Bass, and last but not least the man known only as Minty Bollox on drums.

Due to wifeswapping and incidents of robbery, prostitution and grievous harm, the band are no longer on speaking terms. But EDM has managed to obtain the copyright from their then manager, Alvarez Cortinez, who royally (but legally) screwed them over at the beginning of their career. They famously supported Queen at Pink Flamingo Transport Cafe, a video of which can be obtained by a bloke with a suitcase in Brick Lane , London , on certain Sunday Mornings. Proceeds from the sale of this album will go towards future bail petitions. At time of going to press, the band are being sued by a wealthy famous pop star over their chosen moniker.

Bandcamp Daily  your guide to the world of Bandcamp